ACIDS, BASES AND SALT
BASE
A base is a substance which contains the oxide ion or hydroxide ion and reacts with acid to give salt and water only

Or
A base is a soluble substance which accepts a proton

A soluble base is called Alkali
The Alkali’s are

PROPERTIES OF BASES
1. Alkalis have a soapy feeling (slippery)
2. Alkalis have bitter taste
3. Alkalis turn red to blue litmus paper
4. They react with acids and water only
Question: which bases combine to form NaCl?
5. Alkalis yield ammonia when warmed with ammonium salts

Answer: Special case reaction
ACIDS
These are the substances which when in solution produce hydrogen ions as their only positive ions

TYPES OF ACIDS
There are two types of acids i) Mineral acids
ii) Organic acids
A: Mineral Acids
These are derived from substances formed from minerals, for example; from minerals
The mineral salts that can be derived from the oxides are called oxy – acids (from the acidic/ non – metal oxides)
B. ORGANIC ACIDS
These are derived from plants and animals source animal source (organic sources)
Example;
STRENGTH OF ACIDS
Strength of acids are classified into two i) Strong acids
ii) Weak acids
STRONG ACIDS
These are acids which ionize completely in aqueous solution

WEAK ACIDS
These are acids which ionize partially in aqueous solution

All organic acids are weak
QUESTION;
Is phosphoric acid a strong or weak acid? What are strong bases or weak bases?
PROPERTIES OF ACIDS
1. Have sour taste
2. Action on indicators
Indicator is a substance which changes color in acids or bases
Example; litmus, methyl orange, phenolphthalein etc
3. Corrosive action
A concentrated acid is a water molecule aspires. Acid dries any substance of water content in vigorous action, thus burns skin of animals, leaves and stems of plants.

4. Action with metal
Any metal which is above hydrogen in the activity series will replace hydrogen from the acid. The products of these reactions are salt and hydrogen gas

5. Action with metal oxides and hydroxides to form salt and water only 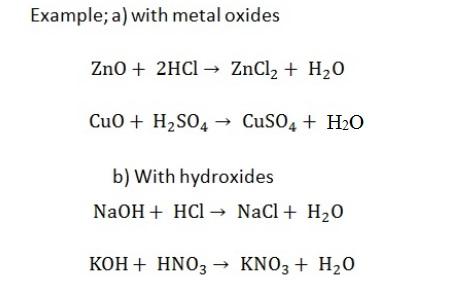 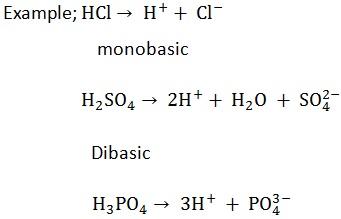 NB: All organic acids are monobasic
PH SCALE;-
It isn’t possible to know exactly how strong an acid or base is by using an indicators. The term PH is used to describe or show the exact strength of an acid or base. It shows the number of hydrogen ion concentration
The PH scale can be represented diagrammatically as show below;

e.g.Pb(NO3)2 + H2SO4 → PbSO4 + 2HNO3
Example;
c) Manufacture of artificial silk
d) Clearing of metals, acids can combine with them to form salts can be easily removed out
e) Necessary for digestion of protein in the stomach.
SALTS
Definition: A salt is a compound consisting of a positive metallic ion (or) and negative ion derived from an acid
Types of salts;
I) Acidic salts
ii) Normal salts
iii) Basic salts
This is the salt which contains part of the hydrogen ions of an acid
Example; Sodium hydrogen – sulphate
Calcium hydrogen carbonate

2. Normal salts
These are the salts which contain neither H+ ions from the acid nor O2- or OH– ions from the base
Example; NaCl, MgCl2,MgSO4 ,FeCl2 ,CaCO3

3. Basic salts
These are salts containing or ions from the base
Example; MgOHCl, ZnOHCl
Magnesium hydroxyl chloride and zinc hydroxyl chloride
O is incorrect because oxygen exists in molecule state but not in atomic
In previous salts was classified according to the nature of salts but in terms of solubility there are two types of salts (i ) Soluble salt ( ii ) Insoluble salt.
SOLUBILITY RULE states;
Soluble salts are;-
a) All salts of (made of) K, Na and NH+4
Example; KNO3,KCl ,K2SO4 ,K3PO4 ,K2CO3,NaHCO3
This is an acidic salt (because it gives out 2 positive ions of Na and H)
Example; KNO3
ii) All hydrogen carbonates
Example; NaHCO3
b) All chlorides except
i) Silver chloride (AgCl)
ii) Mercury (I) Chloride (HgCl) iii) Lead (II) chloride (PbCl2) which is soluble in hot water
N.B: In reactions the compound above are considered as solids (s)
c) All sulphates except
i) – Barium sulphate.
ii) – Lead (II) sulphate.
iii) – Calcium sulphate is slightly soluble in water.
Insoluble salt are;
a) All carbonates except those of K, Na, NH4
b) All hydroxyl except those of K, Na, and Ca (which is slightly soluble in water)
Salt of strong acid and bases do not react with water
Solubility rule (summary)
i) All salts of K, Na and are soluble
ii) All nitrates are soluble
iii) All sulphates are soluble except those Ba, lead (II) and Ca
Vi) All chlorides are soluble except those Ag, lead (ii) and mercury (x)
All carbonates and hydroxides are insoluble except those of K, Na,
NB: – All acids are soluble unless when concentrated (aq)
– All oxides are labeled by solids (s)

2. Addition of an oxide to a dilute acid.
CaO + H2SO4 → CaSO4 + H2O(l) + H2O
v) The general method for preparing soluble salts is called crystallization, for example; Preparation of ZnSO4
Procedure;
a) Add excess Zn to dilute in a beaker Add few crystals of and few drops of concentrated to speed up the reaction rate
c) Crystallization
The filtrate is evaporated and cooled. Check if the crystals are formed. If they are formed stop evaporating and leave it for clay.
The water attached or associated to the crystals is called water of crystallization.
ZnSO4.7H2O is called zinc sulphate hepta hydrate.
B. INSOLUBLE SALTS
The insoluble salts are prepared by ionic precipitation also called double decomposition
Here two soluble salts are mixed and react by interchanging their radicals ion forming both soluble and insoluble salts.
BaCl2(aq) + Na2SO4(aq) → BaSO4(s) +2NaCl


Na2CO3(aq) + H2O(L) → NaOH(aq) + H2CO3(aq)
a) All salts of weak bases and strong acids hydrolyze to give acid solution
Example; NH4, Cl, FeCl2, CuCl2,Al2(SO4) etc.
b) All salts of strong bases and weak acids are hydrolyzed to give an alkaline solution
Example; Na2CO3 ,CH3COONa, etc.
N.B: Salts of strong bases and strong acids are not undergoing hydrolysis. They only ionize when in solution:
Example; NaCl + H2O → There’s no reaction.
3. EXPOSURE TO AIR
When salts are exposed to air they either lose water of crystallization or absorb water from the atmosphere
a) Hygroscopic
Is the action of absorbing water from the atmosphere without changing into solution NaCl, anhydrous copper II sulphate (CuSO4) and NaNO3 others are concentrated and copper II sulphate
b) Deliquescent
This is the action of absorbing water from the atmosphere by a solid to form a solution
Example; MgCl2, CaCl2, FeCl3, Ca(NO3)2
Others are the hydroxides of K and Na
c) Fluorescence
This is the action of giving up water of crystallization of the solid to the atmosphere
Examples;

– While the nitrite gives nitrogen and water
NH4NO2 → N2 + H2O
– The metal nitrates (i.e. those of Ca, Mg, Al, Zn, Fe, Pb, Cu) decompose on heating to give the corresponding oxide, nitrogen dioxide and oxygen 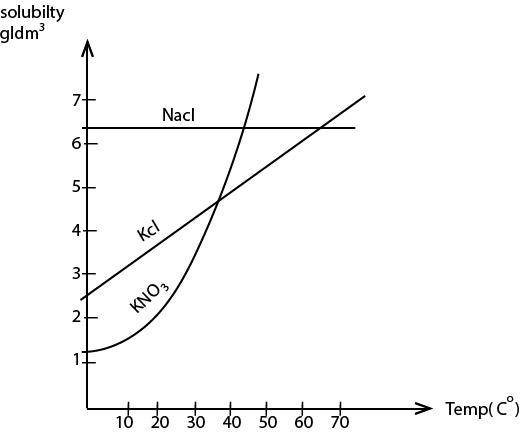 (ii) A graph of KCl is a smooth linear graph which interpret that for every change of temperature give the effect change of solubility. Therefore KCl is more soluble than NaCl.

(iii) A graph of KNO3 is a curved graph interpret that the change of temperature gives a rapid solubility. Therefore a salt KNO3 is more soluble than NaCl and KCl.

Assignment;
Take a salt of NaNO3(S) to examine its solubility.

Procedure
(i) Measure 1litre of distilled water and pour it into the beaker.

(ii) Measure 1g of NaNO3 by electronic balance and pour into the beaker. 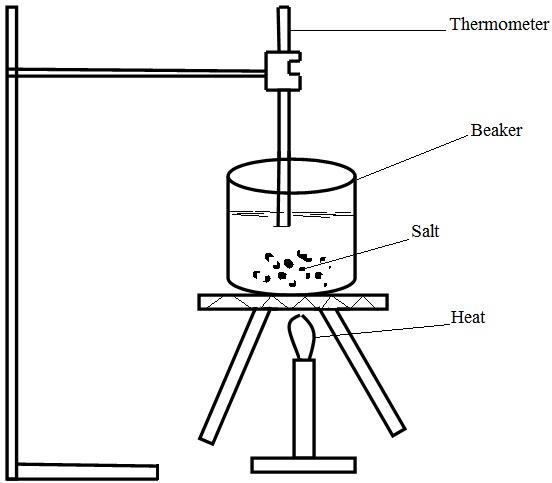 (iv) Watch a disappearance of salt particles until all finish and record the temperature as follows;

(vi) Draw a graph of solubility against temperature.

USES OF SALT IN DAILY LIFE
Salt is essential for life, because it has more than 14000 users in daily. But the common uses categorized into Food, Agriculture,Water conditioning, High way Deicing and Industrial chemicals.

i) A salt of sodium chloride is mixed with food as flavoring, (common salt).

ii) A salt of sodium chloride (NaCl)is mixed in the food industrial product as both flavoring and preservative.

iii) A salt of sodium bicarbonate (NaHCO3) ‘bicarb’ is used in cooking as raising agent for cakes, bread e.t.c.

Baking powder
Is a mixture of sodium hydrogen carbonate and tartaric acid, The mixture helps to keep the PH neutral.

2. AGRICULTURE
A salt is very important in agriculture since used as land additive nutrients. A fertilizers of Ammonium sulphate (NH4SO4(S)) and Sodium nitrate (NaNO3) salt are used to make land fertility to help healthier growing of crops.

i) In the purification of urban water (Permutit process),the salt of Aluminum silicate is used to remove permanent hardness of water (Al(SiO3)3).

iii) Sodium chloride is used in a water softener to generate the ion exchange column.

A salt of sodium chloride (NaCl) is mixed with grit and spread on roads to prevent road freezing in cold condition.

i) The salt of potassium Iodide (KI) is added to sodium chloride (common salt) to prevent a lack of Iodine in the diet.

ii) The salt of sodium carbonate is used in the manufacture of glass.