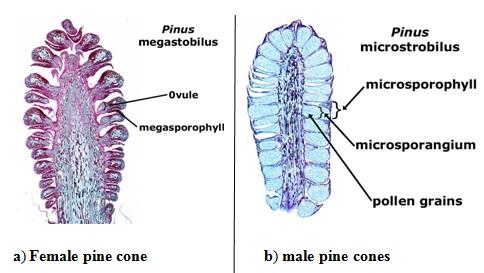 The smaller male cones produce a yellowish powder called pollen. It contains the male sex cells of gametes. The large female cone bears small seed like structure called ovules. This contains female gametes.
The male cone is comparable to a flower but consisting only of pollen producing structures. The pollen is formed on the leaf like scales of the cone. The female cone is comparable to a flavor but with ovule forming parts only. The ovules are attached to the leaf scales of the cone
The distinguish features and characteristics of the organism in this Division are
Advantages
DIVISION ANGIOSPERMOPHYTA
(FLOWERING PLANTS)
This division contains wide variety of forms, but all have common distinctive features as you will see
There are two classes of angiosperms
The feature of angiosperms is leaves, stem, roots and flowers.
Nearly all angiosperms have the same structure in their feature modified according to type and function 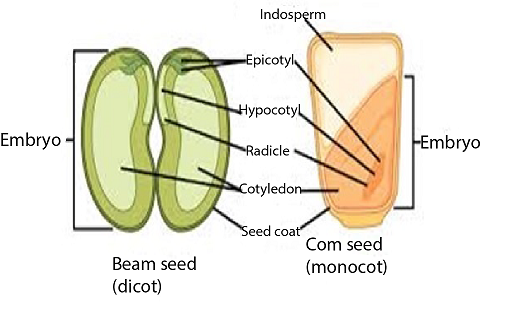 The Distinguishing features of Angiosperms are
1.Their reproductive structure are flowers
2. Ovules are enclosed in an ovary and hence the seeds are enclosed in a fruit.
3. Angiosperms vary greatly in form, size and habitat.
4. They occur in wide range of terrestrial (land) and aquatic (usually fresh water) habitat
Comparing Monocots and Dicots 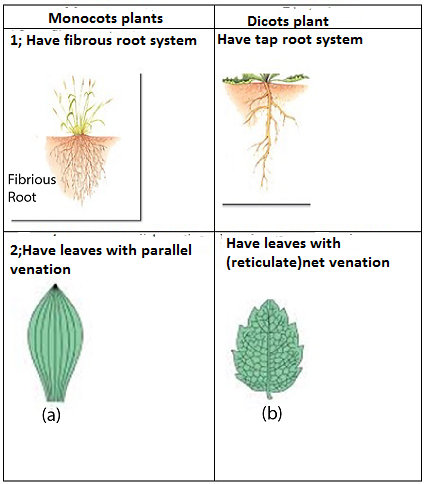 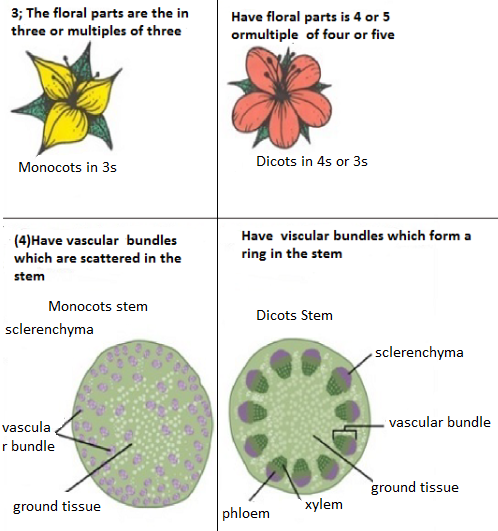 A bean seed or groundnut seed has 2 cotyledons and is described as dicotyledonous. The maize grain has only one cotyledon and is described as cotyledonous
Examples of monocotyledons are maize, coconut, millet, palms, Grasse and orchids.
Examples of dicotyledons are beans, castor, groundnuts, mango, hibiscus plants and balsam plant.
Definitions
1. MONOCOTYLEDON PLANTS.
– Are plants whose seeds have one seed each. (One cotyledon)
– Are plants whose seeds have two seeds (two cotyledons)
A. DISTINCTIVE FEATURE OF MONOCOTYLEDONS
1. Their seeds have one cotyledon.
2. The vascular bundles of the stem are scattered
3. The petals are arranged in groups of leaves
4. Leaves have veins running parallel to one another
5. Most have fibrous root system.

B. DISTINCTIVE FEATURE OF DICOTYLEDON
1. Their seeds have 2 cotyledons.
2. The vascular bundles of the stem and root are arranged regularly
3. The petals are arranged mostly in groups of 5 or more
4. The leaves have veins arranged in a branched network
5. Most have tap root system

Advantage of Angiosperms
1. Are used for timber
2. Are used as a source of charcoal and wood
3. Are used for manufacturing papers
4. Some angiosperms provide medicine (e.g.: neem tree and foxglove)
5. Some flowering plants are used for decorations
6. Angiosperms can be used in production of certain industrial chemicals plastics, rubber, and tannins.
7. Angiosperms can be a good source of organic manure for the production of our crops when they decay.
8. Are used for manufacturing resins.
Disadvantages of Angiosperms
1. Some flowering plants may be allergic to man (e.g. Pollens are allergic to people)
2. The
potted plants in the house compete with man for oxygen
3. Some plants are poisonous to man. (E.g. certain type of cassava)
Tags:biology form three notes pdf download
Share:
FacebookTweetLinkedInPin

HISTORY O LEVEL(FORM ONE) NOTES – SOURCES AND IMPORTANCE OF HISTORY