Is anything that occupies space and has weight. Including all common materials around animals.
States of matter


The kinetic nature of matter to explain the existence of matter in the three states solid ,liquid and gas.

IN SOLID
Particles are packed tightly together so they are unable to move about very much.Particles of a solid have low kinetic energy .The electrons of each atom are in motion , so the atoms have a small vibration , but they are fixed in position
– Solid have a definite shape .They do not conform to the shape of the container. Also they have definite volume.

The particles of substance have more kinetic energy than those in a solid .The liquid particles are not held in a regular arrangement, but are still very close to each other. So liquids have a definite volume -liquid like solid ,can not be compressed .Particles of liquid have just enough room to flow around each other . So liquids have an indefinite shape.

Gas particles have a great deal of space between them and have high kinetic energy .If unconfined, the particles of a gas will spread out indefinitely.If confined, the gas will expand to fill its container.


Relationship between the states of matter

A simple example of matter .If you have a block of ice, you have solid water .Add heat (a form of energy ) and the ice melts into liquid water that you could drink ( it has reached its melting point) continue to apply heat, and the water will evaporate and turn to steam which is water in a gaseous state (it has reached boiling point). This works backward too, gas can cool down by losing energy and condense back into liquid water and cool down farther into a solid. This process is called sublimation where a solid can turn straight into a gas when heat is applied
PHYSICAL AND CHEMICAL CHANGE
•Physical change
This is a type of change whereby no new substances are formed.
Examples of physical changes include the following:
Properties of physical change
•Chemical change
This is a type of change whereby new substances are formed.
Examples are:
Properties of chemical change
ELEMENTS AND SYMBOLS
Element
Is a pure substance that cannot be split into a simpler form by a simple chemical process. There are many chemical elements and they are classified into groups;
1.Metals
These are elements which form positive ions by losing one or more electrons
Properties of metals
Examples of metals are:
2.Non metals
These are elements which form negative ions by electron gain.
Examples of non metals are:
Properties of non metals
Differences between metals and non metals

Chemical symbol
This is one or two letters which represents a specific atoms of an element.
OR.
This is the capital letter of the elements name


Name and symbols to chemical elements

(ii) Names of different elements may have the same first letter for example calcium and copper. It thus necessary to differentiate the element .In this case another letter usually the second from the name is used with the first one .The first letter will be capital while the second will be a small letter (not capital)

(iii) In some cases ,the symbols are derived from Latin names instead of the common English names.

i. Oil and water
ii. Blood
iii. Air
iv. Urine
v. Ink
Types of mixtures
example: Common salt dissolve in a glass of water.
example: A mixture of ice and water.
Difference between mixtures and compounds
SOLUTIONS, SUSPENSIONS AND EMULSIONS
Solution – Is a homogenous mixture of two or more substances in which one of the substance is a solvent and the other are solutes.

Solvent – Is a substance that dissolves the solute. E.g. water
Solute – Is the component in a solution that is dissolved in a solution. E.g. salt
Types of solutions
An unsaturated solution – Is one that can still dissolve more solute of a given temperature.
A saturated solution – Is the one that cannot dissolve more solute at a given temperature.
A super saturated solution – Is the one that holds more solute than it can dissolve at a given temperature.
Significance of saturation
SEPARATION OF MIXTURES
•Many mixtures contain useful substances combined or mixed with unwanted materials.
•In order to obtain these useful substances chemists have to separate them from the impurities.
•They have developed many different methods of separating the mixtures.
•The separation depends on what properties of the substance contain.
The following are the methods of separating a mixture;
1.Decantation
Is the process of separating a heterogeneous mixture of a liquid and a solid
Or
•This is the process of separating solids by pouring out the liquid and only remaining with the solid at the bottom of the container.
•The water in the oceans, lakes and rivers and heterogeneous mixtures that contain sand and insoluble matter that later settles at the bottom when water settles. The process of the components of some of the mixture settling at the bottom is called sedimentation.
•It is the first step in decantation. When muddy water is left to stand for sometime the mad settles at the bottom of the container and clear water comes on top. Also decantation is usually used in the blood tests which require the part of blood to be separated from solid components.
2.Evaporation

Is the process of separating a solute from a liquid.
•The solvent is then converted from liquid to gas through heating the solute that remains as a residue. When a solution of a common salt in water is heated until it evaporates, while solid crystals of the salt are obtained.
3.Distillation

Is the process of separating a mixture by heating a liquid to a very high temperature until it vaporizes in other words turns into a gas.
This gas is then cooled until it turns back into liquid. The cooled vapor is called distillate.
There are two types of distillation.

(b) Fractional distillation
(a)Simple distillation
This is used to separate liquids containing dissolved substances
An example is distilling water from muddy water. 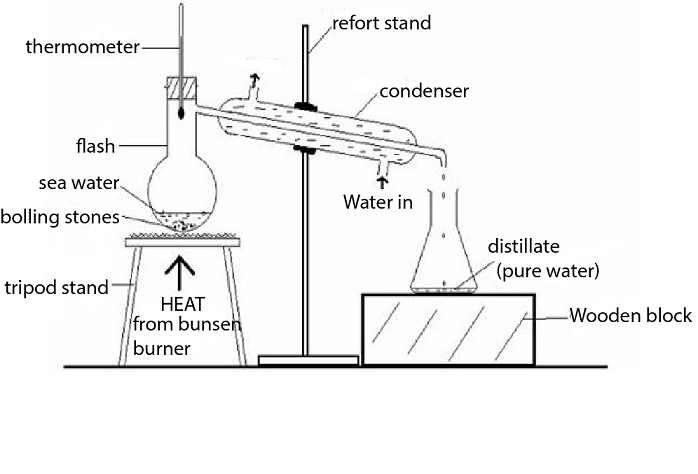 – The condenser helps to cool the steam by means of the water that flows in and out of the condenser. The distillate is pure water and therefore is colorless.
-In a situation where there is no condenser, the distillate is collected in a test tube that is deepen in a beaker containing very cold water or ice.
(b)Fractional distillation
This is the method of separating a mixture of two or more liquid that forms a heterogeneous solution by means of a fractionating column. The liquids are said to be miscible. A good example is ethanol and water, since the two liquids have different boiling points but very close boiling points whereas the solution can be separated by careful heating. The liquid with a lower boiling point is the 1st one to be collected as a distillate.
Each component collected is known as a fraction. 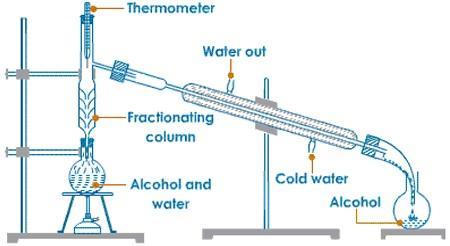 -When a mixture of ethanol and water is heated the ethanol distills first at a temperature of about 78.4%, this is its boiling point. The boiling point of pure water is 1000c.
– The fractionating column separates the two liquids. The one with a lower boiling point ethanol moves to the upper of the column and distills over. Water which has a higher boiling point will tend to stay at the bottom of the column until the ethanol distills over.
4.Layer separation
This is the method used for separating immiscible liquids using a separating funnel. Immiscible are those that do not mix at all but form distinct layers when put together. The most dense remains 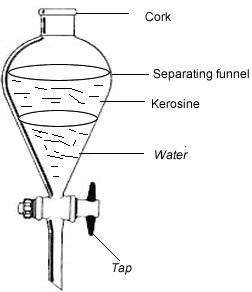 -Poured into the separating funnel they both move to the top of the funnel whereas water is drained out first. Materials used for this method are such as separating funnel, kerosene, water, cooking oil, beaker.
5.Sublimation
This is a process whereby solid changes directly to gas usually on heating.
-The solid that is formed after the vapor cools is called a sublimate. The process can be used to separate mixtures where one of the substances sublimes. Iodine and ammonium chloride are among the few compounds that will be changed directly from solid to gas when heated.
-The reverse process of vapor changing to solid on cooling is called decomposition. Materials used are iodine, ammonium chloride, common salt etc. Other apparatus are Bunsen burner, wire gauze, beaker. When a mixture of iodine and solid is heated the iodine sublimes and then condenses at the bottom of the flask, the sand remains in the beaker.
6.Filtration
This is the method used to separate a heterogeneous mixture of a solid and a liquid.
-Some chemical reaction produce insoluble solid and the mixture can be separated by this method. The solid is separated from the mixture using a filter such as a paper, the solid obtained is the residue and the liquid is the filtrate. Materials and apparatus used are muddy water, filter funnel, conical flask, retort stand and clamp. 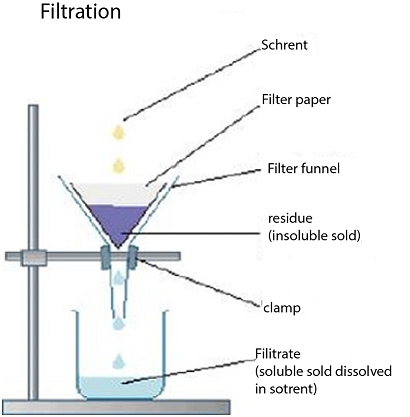 7.Chromatography
This is the process of separating mixtures using a moving soft material that absorbs solvent
– Chromatography is used to separate a mixture of substances into their components so that they can be analyzed and studied. The moving solvent is called mobile phase many may be a liquid or gas. The material that absorb solvent is called stationary phase
8.Solvent extraction
This is the process of extracting essential from plant materials especially seeds using liquid that dissolves the oil. The oil is distilled and the solvent is left to evaporate, the process is referred to as liquid extract. For example seeds which are used to extract oils.
Exercise.

4. Draw and label the diagram of fractional distillation

(b) Describe each of the three state of matter.

(c) Explain importance of changing one state of matter to another.

b/Give the characteristics of each of the above.

c/ Give the differences between physical change and chemical change.

b/ Different between metal and non metal.

4. Define the following a/ (i) compound

b/ Give the differences between compound and mixtures.

5. Define the following
a/ (i) solutions.

b/ mention three classes of mixture.

6. Define the following
(i) Sublimation .