ELECTROVALENCY
The number of electrons lost or gained by an atom of any element is termed as electrovalency. The element which gives up the electron(s) to form positive charge or ions are said to have positive valency. While the element(s) which accepts electrons to form negative ions are said to exhibit negatively valency.
Note:- Variable electrovalency of iron exist as Fe2+ and Fe3+ in ferrous sulphate and ferric sulphate .when a compound is formed by the transfer of electrons, the element that loses electron(s) is said to be oxidized and the element that gains electrons is said to be reduced.
Oxidation is a process which involves loss of electrons where as reduction is the process which involves gaining of electrons.
PROPERTIES OF IONIC/ELECTROVALENT BOND
An ionic/Electrovalent bond has the following properties:-
(i) An ionic bond is formed due to the coulombic attraction between the positively and negatively charged ions.
(ii) An ionic bond is non-directional, the strength of interaction between two ions depend upon distance but not the directional.
(iii) An ionic bond gets broken when the substance is dissolved in polar solvent such as water or when the substance is melted.
Typical examples of ionic bond:-
(a) Na + Cl → NaCl

(iii) Combination of cation and anions. These ions are held together by coulombic force of attraction. In this step, energy equal to the lattice energy is released.

(II) COVALENT BOND
A covalent bond is formed between two atoms (similar and dissimilar) by a mutual sharing of electrons .the shared pairs of electrons are counted towards the stability of both the participating atoms.

COVALENCY
Is the number of electrons which an atom contributes towards mutual sharing during the formation of a chemical bond.
Example of the Covalency: – Covalency of hydrogen (H2)

(I) FORMATION OF MOLECULES HAVING DOUBLE BOND.
(i) Formation of oxygen (O2) molecule:-
Each oxygen atom has six electrons in its outer most shell. Thus it requires two more electrons to achieve the nearest noble gas configuration.
E.g

(iv) High nuclear charge and small atomic size.
High nuclear charge, and smaller atomic size of the combining elements favour covalent bond formation, because the transfer of electrons in such case will not be possible.
COORDINATE COVALENT BOND
Coordinate bond is formed when the shared electron pair is provided by one of the combining atoms.The atom which provides the electron pair is termed as the donor atom ,while the other atoms which accept is termed as the acceptor atom
The bond formed when one sided sharing of electrons take place is called a coordinate or Dative bond. A coordinate bond is presented by an arrow ( → ) pointing towards the acceptor atom.

(b) Formation of coordinate bond between two molecules:-
Two or more stable molecules combine to form a molecular complex,is such a complex molecule, the constituent molecules are held together by coordinate bond

The product above is ammonia-borontrifluoride complex
POLARITY IN COVALENT BONDS :-
Depend upon chemical nature of the combining elements, the following two types of covalent bond are formed

PREDICTING THE SHAPE OF MOLECULES ON THE BASIS OF VESPR THEORY
(i) Molecules with two bond pairs
In a molecule having two bonds pairs of electrons around its central atom, the bond pairs are located in the opposite side (at an angle of 180º) of the central atom so that the repulsion between them is minimum. 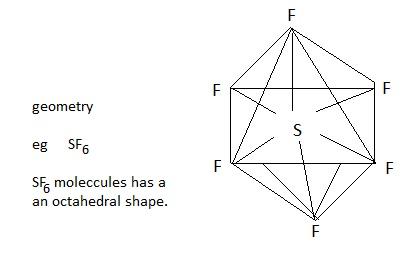 (ii) A molecule of AB3 type has a triangular pyramidal shape
Typical molecules of this type are NH3, NF3,PCl3 and H3O+.

The two lone pairs are the central atom repel the bond pairs slightly inward due to greater lone pair-bond pair repulsion. As a result the bond angle in such a molecule is less than the tetrahedral vale of 109º 28’
The presence of only two bond pairs is the molecules gives a bent shape (inverted V- shaped) to the molecule. Example include H2O, H2S, F2O and SCl2.
(iv) Molecules with four band pair and two lone pairs
The four bond pair are distributed in a square planar distribution. The two lone pairs are in a direction at right angles to this plane. 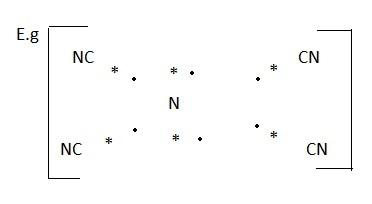 EXERCISE:-
(i) predict the shapes of the following molecules following the VSEPR theory.

During exited state of carbon one electron is promoted from 2S to 2P orbitals .The process of promotion of an electron from 2s to 2p orbital of the carbon atom and subsequent hybridization is illustrated below.
During hybridization/ During excited state ,S is promoted to P orbitals as shown below:

Shape of S is spherical and shape of p is damp bell, then S hybridized with p shape. 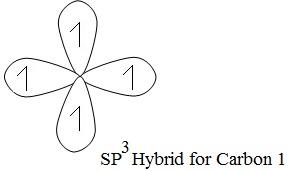 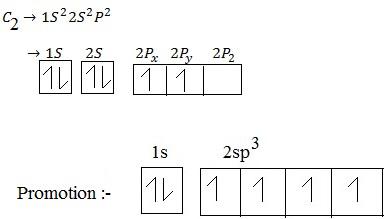 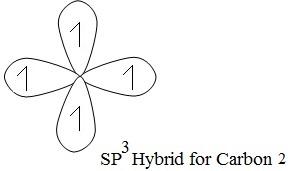 Then C1 combine with C2

(ii) Water (H2O).
Water is a typical polar compound which exhibit hydrogen bonding as shown below:-
Structure of water molecule. 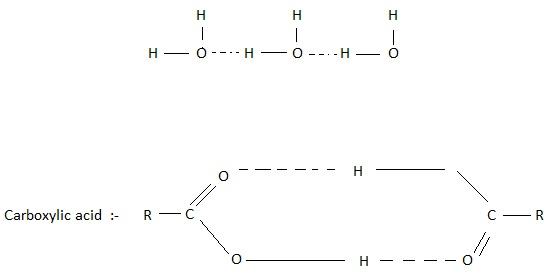 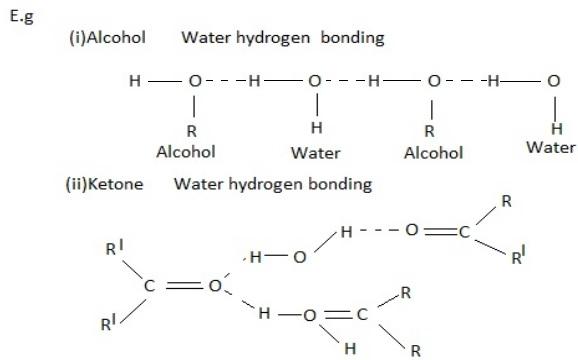 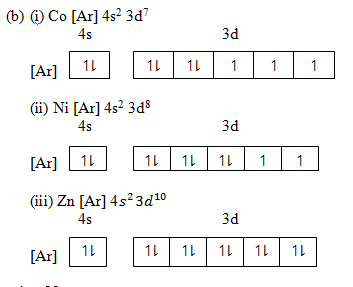 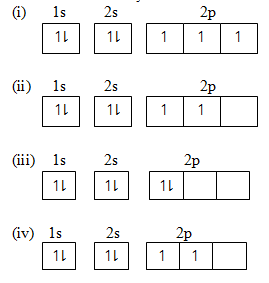 Question 9
(a) The atomic spectrum in the visible is given by the following relationship: = RH
(i) What do symbols λ, RH, n1 and n2 represent? Show their SI units
(ii) Calculate the frequency of the third line of the visible spectrum i.e. a transit form n = 5 to n = 2 (RH = 1.097 X 107 M-1)
(b) By means of series of horizontal lines, draw an energy level diagram for visible atomic spectrum of hydrogen and indicate:
(i) The value of n for each line
(ii) By means of an arrow, show the transition which corresponds to the fourth line of emission spectrum in visible region.
(iii) By means of an arrow, indicate the transition which corresponds to the fourth ionization energy of hydrogen atom.
(c) (i) What do you understand by the term convergence limit and what is its significance?
(ii) Why are the discrete lines observed and not a continuous spectrum in Hydrogen spectrum?
Question 25
(a) Define the term electron configuration.
(b) Write down the electron configuration of these elements in their ground;
(i) Hydrogen 1p.
(ii) Beryllium.
(iii) Neon 10p.
(iv) Aluminium 13p.
(v) Calcium 20p.
(vi) Manganese 25p.
(vii) Cobalt 27p.
(viii) Zinc 30p.
(ix) Krypton 36p.
(x) Silicon 14p.

Question 13
(a) Briefly explain the meaning of these terms, with the help of a diagram
(i) Wavelength
(ii) Frequency
(iii) Velocity
(iv) Amplitude
(v) Wave number
(b) Yellow light from sodium lamp has a wavelength of 5800Ao. Calculate the frequency and wave number of the radiations. Determine the range of frequency of visible light. The wavelength of radiations lying in the visible regions are between (3800 – 7600A0).
Question 14
(a) (i) What do you understand by dual nature of matter?
(ii) How does de Broglie equation consider the dual nature of matter?
(b) (i) Calculate and compare the energies of two radiations, one with wavelength 800nm and the other with 400nm
(ii) What is the amount of radiant energy associated with atomic 6.662 x 10-34Js, velocity of light 3 x 108m/s
(c) If the wavelength of a beam of light is 2.8 x 10-7m. Calculate it’s;-
(i) Wavelength in cm.
(ii) Frequency.
(iii) Energy of one of its photons.
(d) (i) Referring to Bohr’s atomic model, what’s ionization energy?
(ii) Calculate ionization energy of hydrogen. Reydberg’s constant RH = 1.097 x 107m-1
(e) (i) Calculate the frequency of the 3rd line of visible spectrum.
(RH=1.097 x 107m, C=3 x 108m/s)
(ii) Given that the wavelength of the 1st line of Balmer series is 6563A. Calculate the wavelength of the 2nd line in the spectrum.