A. METAL OXIDE
An oxide is a compound of oxygen with another element.
Preparation of oxides:
There are two ways of preparing metal oxides

a) DIRECT METHOD
It involves direct combination of metal with oxygen

It involves thermal decomposition of a salt of carbonate, hydroxide (I) nitrates

2. ACIDIC OXIDES
Are oxides of non metals and when dissolved in water form solution
Examples are CO2, NO2, SO2 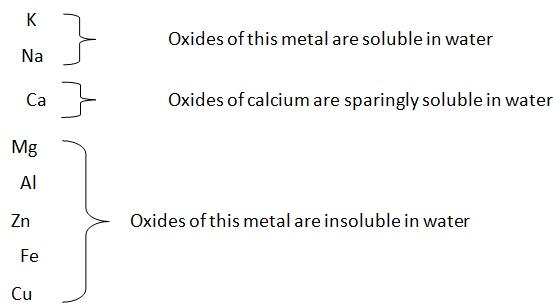 I. Used in preparation of salts in the laboratory

II. Used in formation of slag
III. Used as a drying agent
IV. Used in manufacture of motors
V. Oxides react with acid to form salt and water

iv) Separate the two by filtration.
NB: The filtrate is Ca(NO3)2 and the residue is Cu(OH)2
PROPERTIES OF HYDROXIDE
i) Have bitter taste
ii) Neutralize acids to form salt and water

Solubility of hydroxide in water 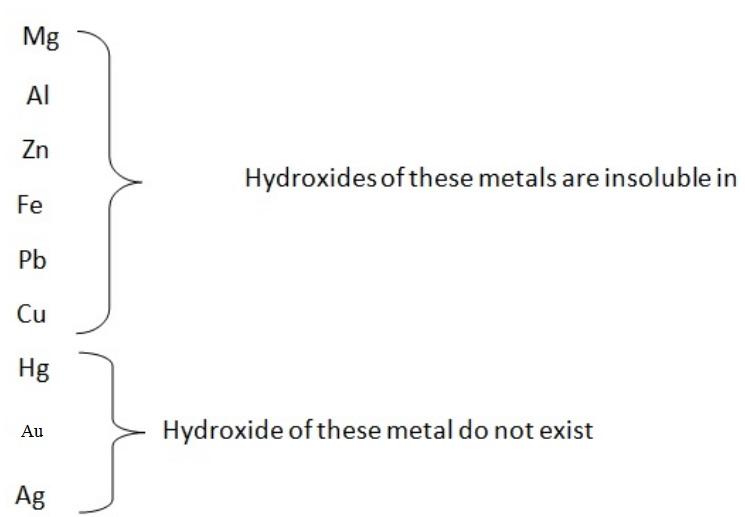 The hydroxide of sodium, calcium and potassium are the strongest because they dissociate completely in water

3. All carbonates give carbon dioxide with dilute acids

The solution is evaporated down and allowed to cool crystals of sodium carbonate is formed
DIFFERENCES BETWEEN SODIUM CARBONATE AND SODIUM BICARBONATE
(Na2CO3) (NaHCO3)
All carbonates and hydrogen carbonates react with acids to form carbon dioxide, water and salt.

Dilute sulphuric acid react very little with calcium carbonate because the product calcium sulphate is insoluble, form a layer on the outside of the carbonates and stop further reaction.
Also dilute sulphuric acid and hydrochloric acid react little with lead II Carbonate because the product, the lead sulphate and lead II Chloride are insoluble, they form layer on the outside of the carbonates which cause to stop further reaction
TEST FOR CARBONATES AND HYDROGEN CARBONATE.
a) Add dilute nitric acid to a solution of a substance. Carbon dioxide gas is evolved, water and salts are formed.

b) i) Add magnesium sulphate to a substance, if carbonates are present white precipitates are formed.

ii) If hydrogen carbonates are present no precipitates are formed
c) Action of heat
Potassium carbonate and sodium carbonate do not decompose when heated. Other carbonate decompose to form an oxide and carbon dioxide 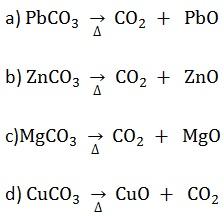 2. The calcium oxide is dissolved in water

3. The carbon dioxide is reacted with ammonia brine

5. The Ammonium chloride and calcium hydroxide are reacted

PREPARATION OF NITRATES
1. All nitrates are soluble and form crystalline solids
2. Action of heat on nitrates
a) Sodium and potassium nitrates give nitrites

b) Many metal nitrates give the oxide
Example; i) Effect of heat on copper nitrate crystals when the blue crystals of copper nitrates are heated in a boiling tube they dissolve in their water of crystallization, prolonged heating gives brown fumes of nitrogen dioxide and the residue, copper oxide is a black.

c) Silver and mercury nitrates give the metal

TEST FOR NITRATES
1. Add concentrated sulphuric acid to the solid nitrate and warm Acid fumes (nitric acid) are involved. Add 3 – 4 copper turning and arm the mixture, the colour of the gas turns to deep brown.
2. The brown ring test is normally used to confirm the nitrates.
To a solution of nitrates are added a few drops of freshly prepared ferrous sulphate solution.
A few drops of concentrated sulphuric acid are added carefully and brown ring obtained at the junction between the liquid.
It is nitrate ferrous sulphate (FeSO4NO) formed that

The nitrogen monoxide then reacts with more iron (II) sulphate to give the brown compound, which appears as a brown ring
USES OF NITRATES
1. Potassium nitrate is used as a food preservative; it is also used to make slow burning fuses.
2. Sodium nitrate is mainly used as a fertilizer
3. Ammonium nitrate is mixed with chalk, the mixture is known as NITROCHALK, widely used as fertilizer.
It is also used in manufacturing explosives.
4. Silver nitrate is used to make silver bromide and silver iodides chemicals used to make photographic film.
CHLORIDES
Chlorine can react with all metals to form chloride. Most common metals are attacked by dil. Hydrochloric acid to form chlorides
Example is Mg, Ca, Al, Zn, and Fe.

Those elements (metals) which are not attached by dilute carbonates or oxides of these metals react with dil.HCl hydrochloric acid to produce chloride
PREPARATION OF CHLORIDE
1. BY DIRECT METHOD
– Chloride can be prepared by direct action of chlorine on metals

Iron (iii) chloride can be prepared by passing Cl2 over a heated metal.
An iron wire is placed in hand glass tube and a steam of dry Cl2 passes over it.
The reaction continues without further application of heat source and iron (iii) chlorides collect in a bottle as shown.
PREPARATION OF SOLUBLE CHLORIDE:
Soluble chlorides can be prepared by mixing dilute hydrochloric acid (Dil.HCL)
i) Oxides
ii) Hydroxides
iii) Carbonates
iv) Metals

METAL SULPHATES
i) Preparation of soluble metal sulphates
Soluble sulphates can be prepared in the laboratory by dissolving a metal, a carbonate, a hydroxide or an oxide in dilute H2SO4 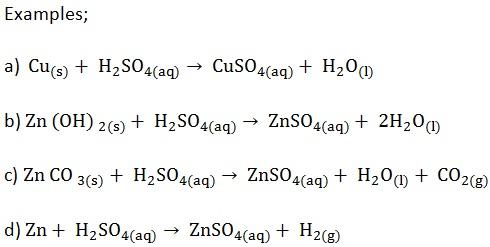 CHEMICAL PROPERTIES
1. All sulphates react with barium chloride to give a white precipitate which is insoluble in dilute HCl
Note. Sulphites and carbonates give precipitate which is soluble in dilute HCl.
2. The sulphates or iron (II), copper (II) and zinc (called green, blue and white vitriol respectively) decompose when heated strongly to give the oxide of the metal, sulphur dioxide, sulphur trioxide and water

Note. In case of copper (II) and Zinc Sulphates, no sulphur dioxide is produced

3. The sulphates of sodium, potassium, magnesium and calcium don’t decompose on heating
USES OF SULPHATES
1. Sodium sulphate
Is used to treat wood pulp in the manufacture of paper
2. Anhydrous (CaSO4) is used as a source of sulphur dioxide for the manufacture of sulphuric acid.
3. Ammonium sulphate is an important fertilizer
4. Aluminium sulphate
Is used in the purification of sewage as it precipitates proteins
5. CuSO4 (copper (II) sulphate) is used as fungicide i.e. destroyer of fungi on plants
Also it is used as an electrolyte for electroplating copper.