RATE OF REACTION EQUILIBRIUM AND ENERGETICS


1. RATE OF CHEMICAL REACTION
This is the speed at which reaction is proceeding per unit time

It will be positive because product is increasing. The slope gives the rate of reaction
The SI unit = mol dm-3S-1
If the plot is reactant concentration against time the slope will be negative
NB: The units of rate depend on the units of reactant or products used
Example; In an experiment of determining rate, the following volumes of gas in the syringe were recorded in every 10 seconds.
a) Plot a graph of the volume shown on the syringe against time
b) Determine the rate of reaction
2. FACTORS AFFECTING RATE OF REACTION
a) Temperature
b) Concentration
c) Catalyst
d) Surface area
e) Pressure (gases)
f) Light
A) TEMPERATURE
The increase in temperature increases the rate of chemical reaction. This is because when temperature increases the particles acquire kinetic energy, hence move faster.
For this matter the collision of the reacting particles also increases.
For every 100c rise the reaction rate doubles
B) CONCENTRATION
The reaction occurs when the reacting substances are allowed to come into contact. The rate of reaction therefore depends on collision frequency which in turn depends on how crowded (concentrated) the particles are
C) SURFACE AREA
The size of particles in heterogeneous reaction influences the rate of chemical reactions. The smaller the particles, the larger the surface area and thus faster rate of reaction
Example; lumps of marble chips (CaCO3) react slowly with dilute hydrochloric acid while the powder of CaCO3 reacts fast with dilute HCl
Aluminium foil slowly reacts with aqueous solution of NaOH when warmed together compared to aluminium powder
D. LIGHT
Light energies some of the reacting molecules (particles). In such reactions, molecules absorb energy in form of light energy rather than heat energy and so they are called photochemical reactions.
Examples are;

When light falls on the film, it causes the decomposition of AgBr as shown above. The extent of decomposition depends on the brightness of sun light.
Different amounts of light reflected from the dark and light surfaces darken the AgBr film to different degrees producing a photograph.
E. CATALYST
A catalyst can either slow down or speed up the rate of reaction.
HOW DO CATALYSTS SPEED UP THE RATE OF REACTION?
For the substance to react they must overcome the energy barrier (Activation energy, EA)
If EA is too great, the substances cannot react at room temperature because the particles don’t process enough energy to surmount the barrier. In such cases, the supply energy in form of heat enables the reaction to proceed 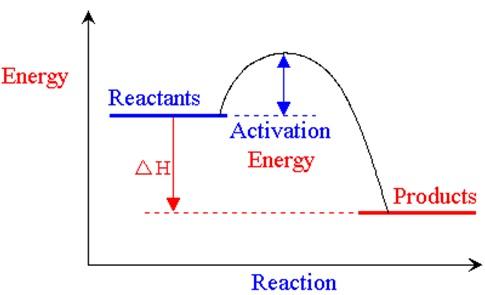 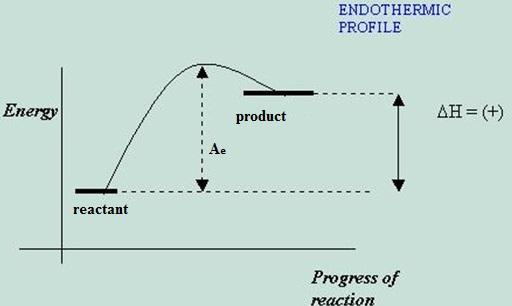 EXPLANATIONS.
1. The energy relationship between reactants and products of a chemical reaction.

A catalyst increases reaction rate by lowering activation energy which is a sort of “Energy hump”, thus providing an easier path from reactants to products.
2. PRESSURE
(For reactants in gaseous phase)
The increase in pressure brings the gaseous particles closer and closer together. This in turn increases the collision frequency. The latter increases the rate of reactions.
3. REVERSIBLE AND IRREVERSIBLE REACTIONS
Reversible reactions are reactions which proceed in both directions (background)

Consider the analogous system of compounds in the same phase

What will be the effect of adding more steam to the POE – position of equilibrium of this reaction?
Adding more steam will pose an effect in the equilibrium of the backward reaction. Thus to minimize the effects the reaction must proceed forward therefore the POE will shift to the RHS.
NB: A reaction in which a gas is evolved and allowed to escape or in which a precipitate is formed will proceed in one direction only, even though a reversible reaction might be expected

S (s) precipitate, it’s almost completely removed from the system. Backward reaction is then not possible
There is complete conversation of reactants to product

H+ are removed as H2 (g) Thus water dissociation has to keep going on
The forward reactions will continue without the backward reactions thus equilibrium is affected
D. CATALYST
A catalyst doesn’t upset the equilibrium of the system because both reactions will proceed at a faster rate
A catalyst doesn’t affect the POE
ii) Endothermic reaction
b) State the Le Chatalier’s principle
c) The equation for dissociation of calcium carbonate is

What will be the effect on the proportion of calcium carbonate in the equilibrium mixture if
i) Temperature is increased
ii) Pressure is increased
What are the necessary conditions for manufacture of calcium oxide from calcium carbonate in large scale?
i) Increase in temperature the forward reaction is favoured, that is CaCO3 will be splitting to form CaO and O2 thus the effect on the proportion of CaCO3 in the equilibrium will be the decrease of CaCO3.
ii) Increase in pressure
Pressure only affects substances in equilibrium in gaseous phase. Thus, CaCO3 and CaO are considered to have zero volume since they do not react with pressure, but since CO2 reacts with pressure its volume is considered to be 1. Therefore, backward reaction will be favoured thus the effect on the proportion will be the increase in CaCO3
Conditions
By removing CO2 from the reaction , the concentration of CaO in the products side will favour more quicker forward reaction to replace the lost CO2(g) thus more CaO will be manufactured.
2. Define the following;
i) Reversible reaction
ii) Rate of chemical reaction
iii) Catalyst
b) Bahati attempted to prepare hydrogen gas by reaction between Zn metal with H2SO4 .In this experiment, Zn metal of about 0.5cm diameter was used and 0.2 moles of acid. The rate of formation of hydrogen gas was found to be slow. Explain 3 ways in which the rate of formation of hydrogen could be increased.
c) If bahati wanted 36dm3 of hydrogen at S.T.P. What amount of zinc would be required if 0.2moles of acid were used
The equation for the reaction is;

Thus increase K.E of the particles so as to taste up the reaction.

Exothermic and endothermic reactions are the types of reactions which associate internal energy change to external energy of surrounding environment.

A coldness and hotness in the environmental surrounding after stopping reaction is a result of internal change of energy for reactant to product.

EXOTHERMIC
An exothermic reaction is one during which heat is liberated to the surrounding.

ENDOTHERMIC
An endothermic reaction is one during which heat is absorbed from the surrounding.

Example;
A reaction to form liquid of carbon disulphide which used to manufacture Acetylene gas. Acetylene gas applied in the welding cylinders.

Where by Ea = Is Activation energy.