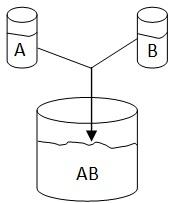 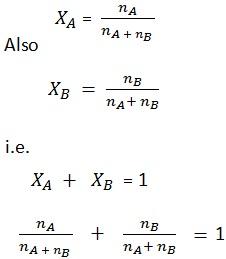 When expressed in decimal

RAOULT’S LAW OF PARTIAL PRESSURE
The Raoult’s law of partial pressure states that
“The saturated vapour pressure of each component in a mixture is equal to the product of mole fraction of that component and its pure vapour pressure”
ASSUMPTIONS OF RAOULT’S LAW
For the Raoult’s law to be feasible the following assumptions are to be considered.
i) Intermolecular forces of attraction should be equal to the intermolecular forces of attraction.
ii) After mixing the component there must be no change in volume.
iii) There must be No change in temperature.
iv) The liquids must be miscible.
v) The liquid should not react.
CONCLUSION
The solutions that do obey all assumption of Raoult’s law are called IDEAL SOLUTION. While the liquid which deviate from the assumption of Raoult’s law are termed as NON – IDEAL SOLUTION/REAL SOLUTION.
IDEAL SOLUTION
In an Ideal solution the cohesive forces between its molecules. In an ideal or perfect solution, the cohesive forces would be just the same as those existing in the separate components of the solution. A solution made from A and B would only be ideal if the forces existing in the solutions of A and B were just the same as those existing in pure A and pure B.
Ideal solutions are rare, but they are most likely same to occur with mixtures of two almost identical chemicals e.g. hexane and heptane. Most solutions deviate considerably from the ideal because the interactions within the solution are different from those in the pure liquids. 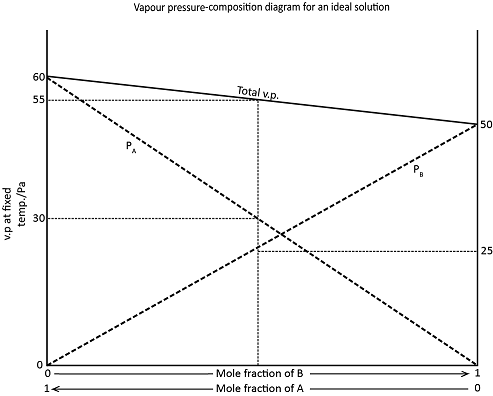 (2) BOILING POINT COMPOSITION DIAGRAM
The shape of the boiling point diagram depends on the nature and the degree of deviation from Raoult’s law of the two liquids concerned. There are three important type of diagram:

i) No maximum or minimum
This type corresponds with the vapour pressure composition diagrams. Any deviation from Raoult’s law is relatively small.

Boiling point composition diagrams with no maximum or minimum 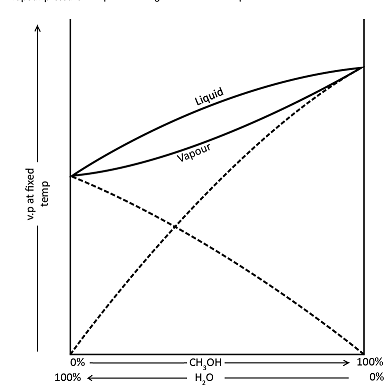 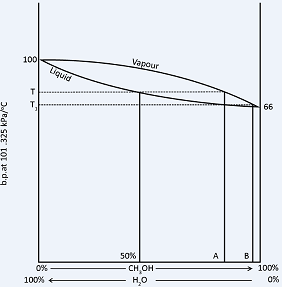 Boiling point composition diagram with no maximum or minimum
A diagram of this type is given by methanol water mixtures. The liquid line shows the way in which boiling point of methanol water mixture varies with composition at fixed pressure.
For liquid mixture of any one composition the water vapour with which it is in equilibrium will be richer in the more volatile component i.e. in methanol. The liquid line has therefore an associated vapour line. The vapour pressure composition diagram corresponding with this Boiling point composition diagrams as shown above.
When a mixture of methanol and water containing 50 per cent of each is boiled, it will boil at temperature T. The vapour coming from it will have a composition represented by A, and on condensing, this liquid is boiled again, it will now boil at temperature t1, giving a vapour of a composition B, and this will condense into a liquid whose composition is also B. By repeating this boiling condensing boiling point process, pure methanol could be obtained, but the method would be tedious, and the same result can be obtained in one operation by fractional distillation using a fractionating column. 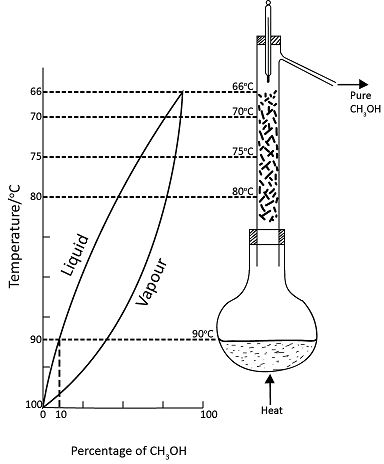 Idealized and simplified representation of the fractional distillation of a mixture of methanol 10% and water 90% using fractionating column.

A simple and effective column for laboratory use consists of along glass tube packed with short lengths of a glassing tubing, glass beads or specially made porcelain rings. The aim is to obtain a large surface area, and there are many patent designs of column. Industrially, a fractionating tower is used. Such a tower is divided into a number of compartments by means of trays set one above the other. These trays contain central holes, covered by bubbles caps, to allow vapour to pass up the tower and overflow pipes to allow liquids to drop down.
At each point in a column or at each plate in a tower, an equilibrium between liquid and vapour is setup and this is facilitated by an upward flow of vapour and downward flow of liquid, a large surface area slow distillation. It also preferable to maintain the various levels of the column or tower at a steady temperature so that external lagging or an electrical heating jacket is often used.

These state of affairs existing in an idealized and simplified distillation of a mixture of a methanol and water, containing 10 per cent by mass of methanol as shown in the figure above. The figure shows five liquid vapour equilibria which are setup at different temperatures in the fractionating column.
The purpose of the fractionating column is to facilitate the setting up of this equilibria.
Mixtures of varied compositions can be drawn off from different points on the column or tower as is done, for instance in the fractional distillation of crude oil in a refinery. 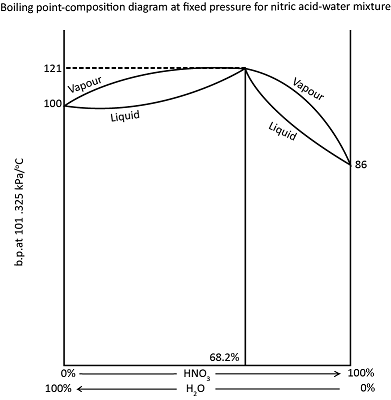 Thereafter the distillate will 68.2 percent nitric acid be as before. A mixture with this type of boiling point composition curve cannot be completely separated by the fractional distillation. It can only be separated into a one component and what is known as the constant boiling mixture, maximum boiling point mixture, or azeotropic mixture.
Maximum boiling point of mixtures are also obtain from mixtures of water with hydrofluoric, hydrobromic, hydrochloric, sulphuric and methanoic acids. 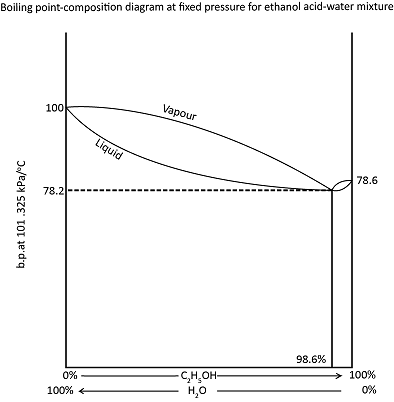 c) Absorption
Charcoal or silica gel may absorb one of the components.

d) Solvent extraction
One component can be extracted by a solvent.
PARTIALLY MISCIBLE LIQUIDS
Critical Solution temperature.
Phenol and water are completely miscible, forming one solution, above 66oC, but two immiscible solutions may from below that temperature, depending on the composition of the mixture. One of the solutions will be a solution of phenol in water, the other a solution of water in phenol.
They called conjugate solutions
The effect of composition and temperature is shown in a temperature-composition diagram below. The temperature above which phenol and water are always completely miscible is known as the upper critical solution temperature. At any point above the curve there will only be one layer, i.e. one solution. Below the curve, two layers will-always form and the curve will give the compositions of the two conjugate solutions making up the two layers. A mixture of 50 per cent phenol and 50 per cent water, for example, at 50 °C, will form two layers whose compositions are given by A and B. The line YZ is known as a tie-line. The ratio YX/XZ is equal to the ratio of the mass of the phenol layer (of composition B) to that of the mass of the aqueous layer (of composition A). 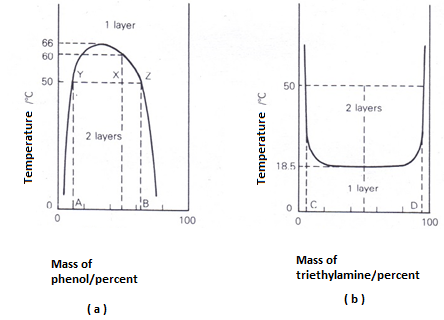 The complete miscibility of phenol and water with increasing temperature comes about because their mutual solubilities increase as the temperature does. The curve in Fig.(a) can be regarded as made up of two halves, one being the solubility curve of water in phenol and the other the solubility curve of phenol in water.
With triethylamine and water the mutual solubilities decrease as the temperature is increased. This leads to a temperature-composition diagram with a lower critical solution (or consolute) temperature of I8,5°C (Fig. (b)). A 50:50 mixture will be completely miscible at 10 °C but will separate into two layers, with compositions C and D, at 50 °C.
Mixtures of nicotine and water are very unusual as they have both an upper (208 °C) and a lower (61 °C) critical solution temperature.
Conjugate solutions have the same total vapour pressure and the same vapour composition; that is why they can coexist together.
REVIEW QUESTIONS
1. Some solution are ideal while others are not briefly explain what do you understand by this statement
2. How do ideal gases differ from ideal solution?
3. Define the following
i) Mole fraction of that liquid
ii) Ideal solution
iii) Briefly explain how Raoult’s law becomes feasible

2Fe2O3(s) + 8 SO2(g)
Find the mass of oxygen in grams reacting when 75 litres SO2 is produced at 1000C and 1.04 atm.
9. What is azeotropic mixture?
Azeotropic mixture is the mixture of two different components with constant vapour pressure and boiling point and it cannot be separated by fractional distillation.
10. What is azeotropic point
Azeotropic point is the point in temperature composition graphic which shows the azeotropic temperature and its composition
11. What is azeotropic temperature?
Azeotropic point is the temperature is the temperature at which azeotropic mixture tend to boi
The temperature composition graph of non ideal solution shows some deviations from ideal behaviour deviation
i) Positive deviation
ii) Negative deviation
iii) Boiling point composition diagram which undergo Positive deviation
12. a) Define the following terms
i) Azeotropic mixture
ii) Azeotropic point
iii) Boiling point
iv) Azeotropic composition
b) Liquid Q and R from a non ideal solution. If liquid Q boil at 100oC and R boil at 43% less than that of Q. On boiling the azeotropic mixture was formed at 56% composition by mass liquid Q and boil at 51oC
i) Plot the temperature composition graph
ii) What type of deviation is shown by your graph?
13. a) What do you understand by the following terms
i) Non ideal solution
ii) Azeotropic solution
b) How does non ideal solution deviate from ideal solution?
c) The mixture container the following water and nitric acid which boil at 86oC . The composition of azeotropic is 68% by mass nitric acid
i) Plot the boiling point curve which represent above data
ii) Account for the distillated and residue on distilling the mixture contain 50% by mass water
iii) Account for the distillated and residue on distilling the mixture contains 78% by mass HNO3. If azeotropic temperature is 12oC
iv) Is the deviation positive or negative? Why?
v) 20% by mass HNO3 . Account for the distillated at the point.
14. i) Raoult’s law states that
The saturated vapour pressure of a component in a mixture is equal to the product of mole fraction of that components and its partial vapour pressure
ii) Partition law state that
When a solute is added to two immiscible solvents it distribute itself between the two solvent until the ratio of concentration of solute in one solute to another is constant, provided that solute remains in the same molecular state in both solvent and temperature is constant
b) The ideality of a solution is approached when it is made more dilute because the attractive or repulsive forces between solvent and solute molecules become weaker and cause the gas to obey assumption Raoult’s law .
As a solution become more dilute
* In start stronger forces, grater deviation from Raoult’s law , solution become more constant