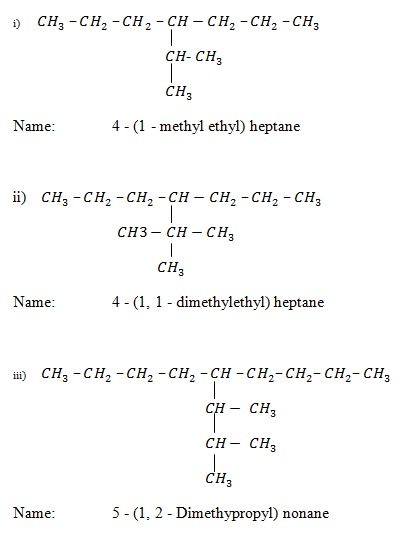 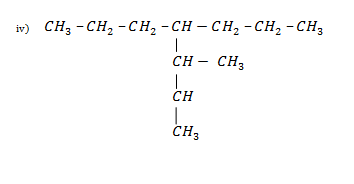 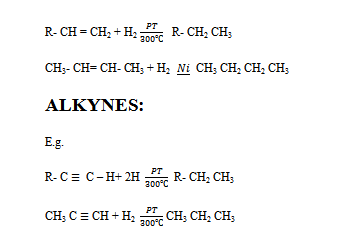 a) Reduction of alkyl halide by metal and acid

The hydrogen displaces Bromine. Only done in the presence of Zn metal
b) Reduction of Alkyl halide by using zinc and copper coupled with alcohol

Note:
Both zinc and copper must be present together with alcohol.

NOTE:
Function of red phosphorus is removing iodide so that hydrogen can react with the alkyl halide.

(c) Wurtz Synthesis
Alkyl halide in dry either solution react with sodium to produce alkane always the product has twice the number of carbon as that of alkyl halide.

NOTE:
Dry ether is very important condition.
(d) Decarboxilation of sodium carboxilate salt
This is the reaction between carboxylic salt and sodium hydroxide in the presence of calcium oxide. The product will have 1carbon less than the reactant.

Exercise (H/W)
1. Preparation of alkanes from petroleum, coal, natural gas.
2. Read on method of preparation known as cracking. Preparation of alkanes from petroleum and natural gas.
– Petroleum is formed from the remains of tiny marine organisms that died and sank to the bottom of the sea millions of years ago.
– Petroleum is a mixture of many organic compounds, since the organic compounds are lighter than both the rock and the water they move upwards through the adjacent rock. Sometimes the organic Compound are trapped in porous rocks that are called reservoirs beneath impermeable rocks.
– Example of reservoir is limestone.
– Reservoirs from which petroleum can be extracted by drilling are referred to as oil fields.
– The petroleum obtained is referred to as a crude oil.
Fractional distillation of crude oil:
– Major components of crude oil are:-
(i) Residuals (coke, asphalt, tar).
(ii) Lubricating oils.
(iii) Fuel oils.
(iv) Diesels.
(v) Kerosene.
(vi) Naptha.
(vii) Petrol.
(viii) Petroleum gas.
The components of the crude oils are known as fractions and different fractions are separated by heating them in a process known as Fractional distillation and it is done in a distillation tower called a still.
The oil is first evaporated by heating . The vapour rises up and the tower acts as a giant heat exchanger removing heat from the gases as they rise up. Temperature falls to 20

by the time vapour reaches the top. The vapour condenses as they rise up.
The heavier ones i.e. those with higher boiling points condense first. Gaseous fractions pass out at the top.
Cracking
Some of the fractions obtained from the fractional distillation of the crude oil are converted into new products.
Cracking is the conversion of large molecules of organic compounds into compounds with smaller molecules.
There are two methods;-
(i) Thermal cracking.
(ii) Catalytic cracking.
In thermal cracking the large molecule organic compound is heated to a high temperature until its molecule break apart.
In catalytic cracking, a catalyst speeds up the cracking process.
(e) Preparation of Alkanes from alcohols:
By reduction of alcohols:
When alcohols are hated with concentrated hydroiodic acid and red phosphorus at 423k under high pressure, alcohols can be reduced to alkanes.

Increase in molecular mass leading to the increase in melting & Boiling points
NB:
If you compare straight chain and branched chain of same molecular mass; straight chain has higher M.P &B.P. Branched chained isomers have lower boiling points and melting point than straight chain isomer.
Reason: Branched chains are more compact hence have less surface area. This is why they have low M.P and B.P. Straight chains have higher surface area.
(b) Solubility:
They are soluble in non polar organic solvents but insoluble in polar compounds e.g. Water.
Chemical properties of alkanes:
In general, alkanes are non reactive (inert) compared to other classes of organic compounds.
Reason:
(i) They don’t have a functional group.

– Electrophilic reacts with a negatively charged species.
– Nucleophilic reacts with a positively charged species.
Alkanes can undergo the following reaction;-
(i) Substitution reaction.
(ii) Oxidation reaction.
(iii) Thermal decomposition (cracking).
All these reactions take place at high temperature or under the presence of light energy.
I. SUBSTITUTION REACTIONS
a) Halogenations

❖ Function of UV – light is to give out a free radical.
Mechanism of reaction 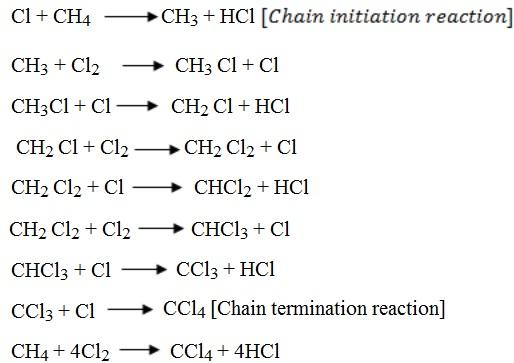 NOTE:
With fluorine, the reaction is violet and yield hydrogen fluoride and carbon.

However, controlled fluorination in the presence of cobalt moderator the fluoral derivatives are formed.
NITRATION (With Nitric acid)
This involves the substitution of hydrogen atom in alkane with NO2 group. This is done when a mixture of alkane and nitric acid vapour is heated at 400

SULPHONATION (With sulphuric acid)
Alkanes when subjected to prolonged reaction with fuming sulphuric acid one hydrogen atom of alkane is replaced with – SO3 H group known as sulphonic group.

Oxidation Reactions:
When alkanes are ignited in the presence of excess oxygen they burn to form carbondioxide and water only.
Reaction is highly exothermic:

Thermal decomposition (PYROLYSIS)
This is breaking down of higher alkane into lower alkane by heating alkanes in absence of air.

Alkane and alkene are the only possibilities.
NOTE:
No two alkenes will be formed.
Catalytic cracking (Isomerization)
When straight chains of alkanes are heated in aluminium chloride in the presence of dry hydrogen chloride at 300

This process is used in petrol chemical industry. The branched chain alkane has higher octane number. Hence branched chain burns easily than straight chains.
Question:
– How to form aromatic compounds i.e. Aromatizations
– Uses of alkanes
Exercise:
Qn. How can the following conversions be achieved?
(a) Propyne to propane
(b) Hexane to 3methylpentane
(c) Ethane to butane
(d) Pentane to nitropentane
Solution: 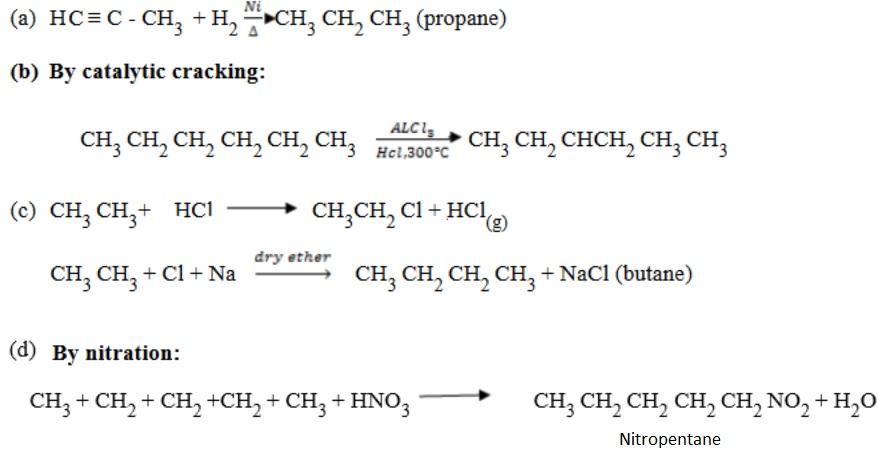 AROMATIZATION
– Alkanes containing six or more carbon atoms when heated under pressure in the presence of suitable catalyst get cyclised to give aromatic compounds.
E.g.
n – hexane gives benzene 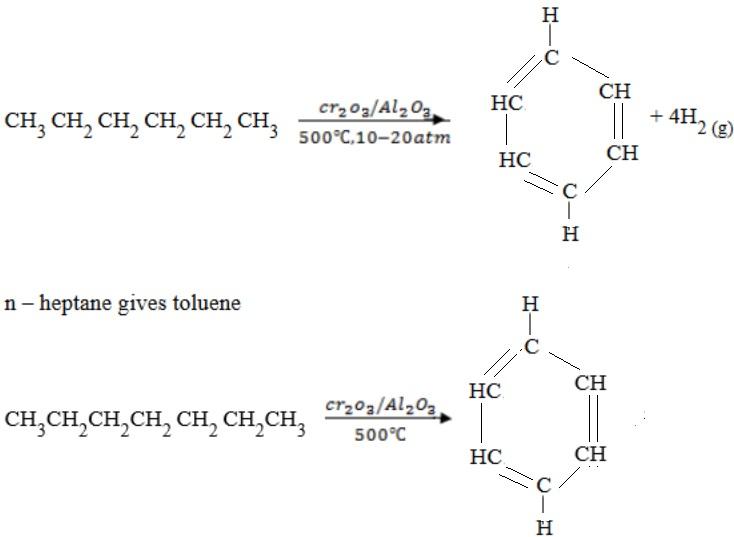 USES OF ALKANES
Alkanes are the simplest organic compound containing carbon and hydrogen. Some major uses of these compounds are;
(i) Lower alkanes occurring as natural gas and lighter petroleum fractions are used as fuels.
(ii) Low – boiling liquid alkanes e.g. hexane are uses as solvents.
(iii) Heavy petroleum fractions are used as lubricants (grease) and for obtaining waxes and vaseline
(iv) The products of cracking process are generally used for producing linearalkyl benzene (LAB) used as a raw material for manufacturing detergents.
ALKENES
These are hydrocarbons which are unsaturated. They contain double bond between two carbon atoms.
Functional group is C = C and share the same formula with cycloalkanes (cyclalkanes) are known as fractional isomer.
General formula: Cn H2n
Cycloalkanes: Cn H2n
The type of hybridization is sp2 hybridization since it is trigonal pyramidal shape. 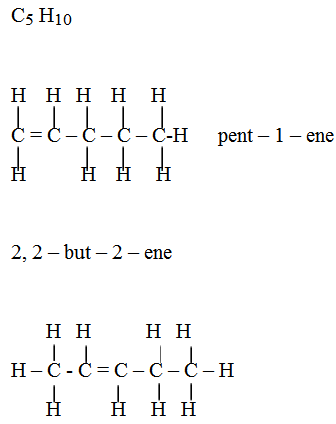 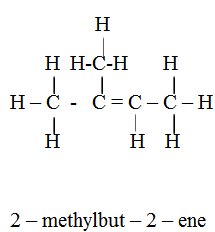 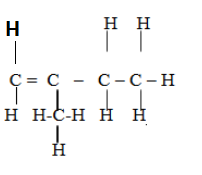 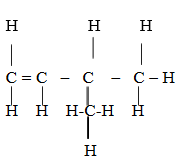 Positional isomerism:
This arises from the difference in the position of the double bond.

Definition:
– Is brought in the difference in the spatial arrangement of atoms or group of atoms about the double bond.
Functional isomers:
These compounds have the same general formula but difference functional group.
E.g. Alkene and cycloalkanes i.e Cn H2n

Cyclobutene
Laboratory preparation of Alkenes:
(i) Dehydrohalogenation of haloalkanes (alkyl halides)
– There is elimination reaction.
– The reaction is done in alcoholic basic medium.
Note:
General formula for alky halides is R – X, X = Cl, Br, F
– When alky halide is heated with alcoholic solution of sodium hydroxide or potassium hydroxide, hydrogen and halogen will be eliminated and alkene is formed.

This is known as Basic induced elimination reaction

SAYTZEFF’S RULE
It states, “during elimination reaction, the electrophyl (H+) is removed from carbon atom with fewer number of hydrogen atom.
Example of reactions which apply Saytzeff’s rule;-

this reaction is sensitive to temperature

iii) Dehalogenation of vicinal dihalides
Vicinal means the halogens are on the adjacent carbon of the same carbon.

iv) (a) Controlled hydrogenation of alkynes
It is done under palladium catalyst which is poisoned by calcium carbonate and quinoline and this reagent is known as Lindlers catalyst.

Note:
Poisoned means that the palladium is not pure
(b) Sodium, Lithium and Ammonia
This is not complete hydrogenation.

Chemical properties of Alkenes:
NOTE: Alkenes are more reactive than alkenes due to the presence of pi bond which is relatively weak. Hence, can react easily
1. Addition of hydrogen halides (HX)
Alkenes undergo electrophilic addition reaction (electron loving/electron deficient).
Electrophilic addition reaction is the reaction in which electrophyl is added first followed by nucleophyl.

Note:
Hydrogen is added to the more stable carbon.
2. Hydration of alkenes:
Hydration means addition of water.
– This is addition of water in the presence of mineral acids. The most preferred acid is conc H2SO4. The mixture should be heated in order to form alcohol.

Carbocation will be formed in CH
Home Work:
Anti – markovnikov’s rule (organic peroxide HBr). In 1933 the American chemist M. S. Kharasch discovered that the addition of HBr to unsymmetrical alkenes in the presence of organic peroxide (R – O – O – R) takes a course opposite to that suggested by Markovnikovs rule. 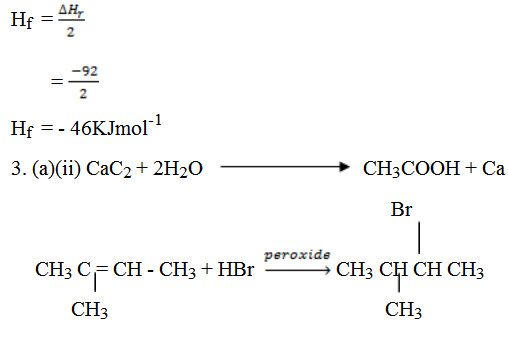 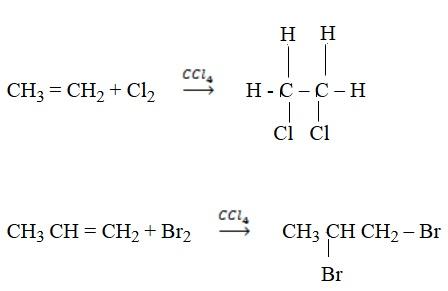 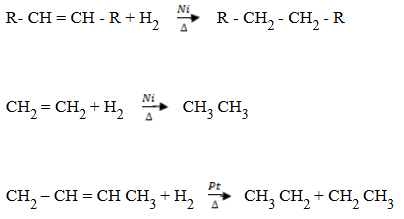 ❖ This cannot take place without catalyst.
5. Hydration of Alkenes:
– This follows Markrnkov’s rule.
Homework on hydration of alkenes
– Find the reagent which should be added to alkene to follow Anti markornikovs rule.
Oxidation reaction of alkenes
6. Addition of Bromine water (Br2/H2O) 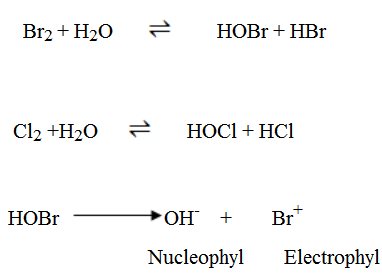 7. Oxidation reactions of Alkenes
– Alkenes react with oxidizing agent to form diols. Oxidizing agent can be either KMnO4, K2CrO4.
– With cold dilute KMnO4 or cold alkalineKMnO4 you form diols.

(b) When hot concentrated acidified KMnO4 or K2Cr2O4 is used. Alkenes are oxidized to carboxylic acid or oxidized to ketones or both. 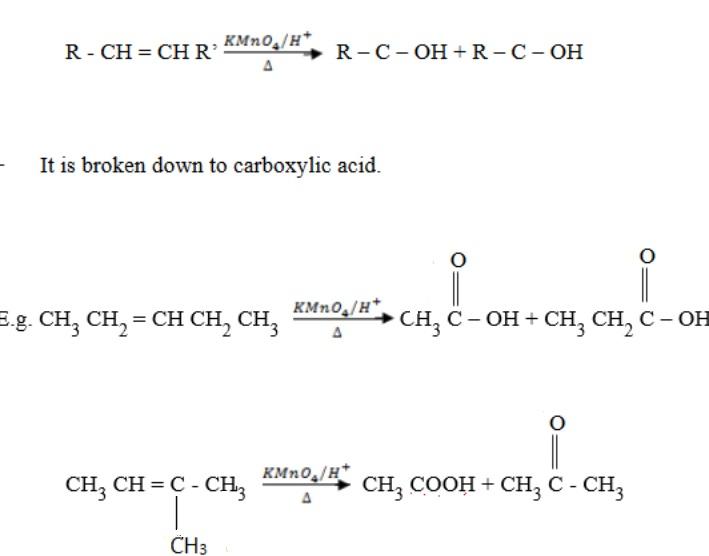 Breaking
– This is a cleavage or breaking of carbon, carbon double bond by using ozone.
– In ozonolysis C = C is completely broken to produce aldehydes or ketones or both depending on the primary structure of alkene.
NOTE:
Ozonolysis is the best method of locating the position of double bond in unknown alkene.
The oxygenated carbon in carbonyl compound obtained by ozonolysis is the one that were joined by double bonds in the original alkenes.
Ozonolysis has 2 major steps:
i) 1st step: 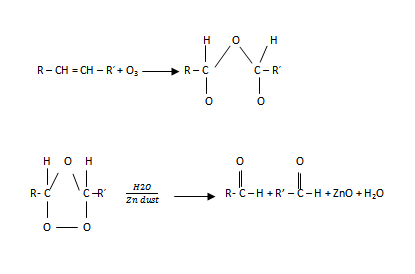 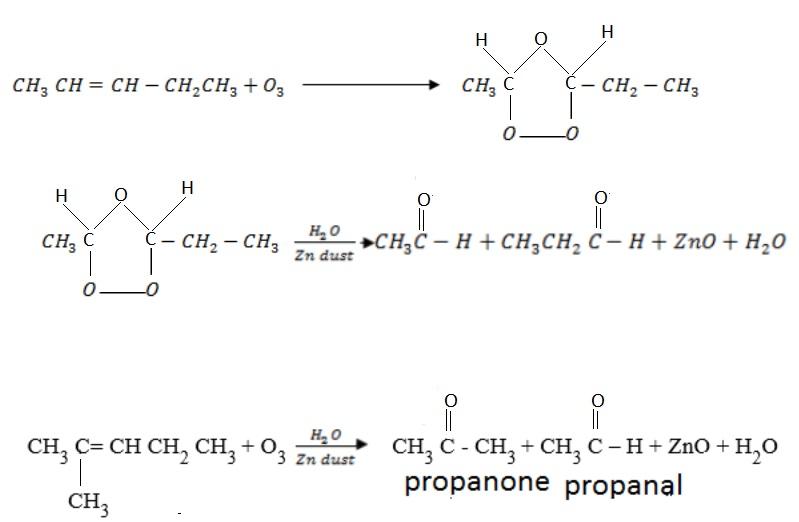 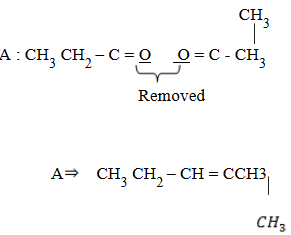