i) STRUCTURES OF AMINES
Amines are derivatives of ammonia in which one or more hydrogen have been replaced by alkyl group or aryl group.
General formula:

If two hydrogens have been replaced we have;

2° amine
If 3 hydrogens have been replaced we have; 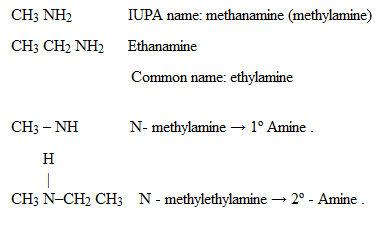 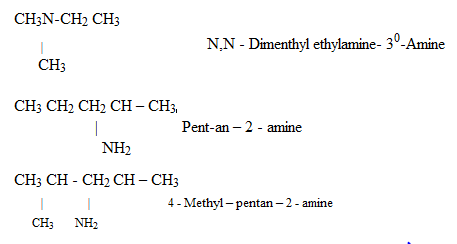 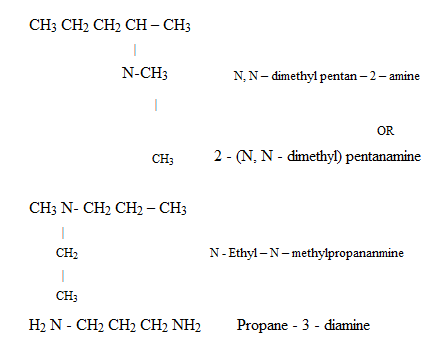 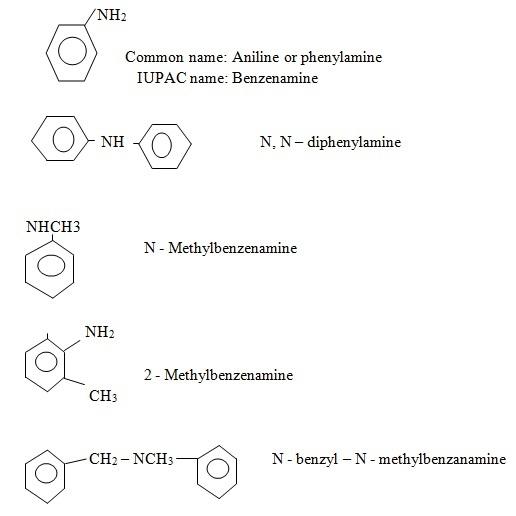 
iii ) PREPARATION OF AMINES
1.ALKYLATION OF AMMONIA WITH HALOALKANES

amine can be obtained by reaction of alkyl halide with excess ammonia.
Why excess ammonia?
So as to prevent the formation of 20 amine or 30 amine. Therefore, this is not a suitable for preparation of amine because the substitution of hydrogen does not stop at the first stage.

2. REDUCTION OF NITROALKANES (R – NO2)
10 amines can be obtained by reduction of nitroalkane. The reducing agent is LiAlH4 or Sn/HCl or Fe/HCl

3. REACTION OF AMIDES WITH LiALH4
1

amides can be reduced to 10 amines

4.AMMONIATION OF CARBONYL COMPOUND FOLLOWED BY REDUCTION WITH HYDROGEN IN THE PRESENCE OF NICKEL 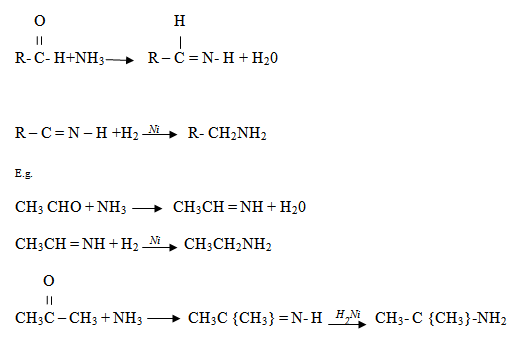 6. REACTION OF ALCOHOLS WITH AMMONIA
Catalytic ammoniation of alcohol gives a mixture of amines.

It is important reaction in the conversion of amide to amine with one carbon less.

(i) By Hoffman’s degradation reaction 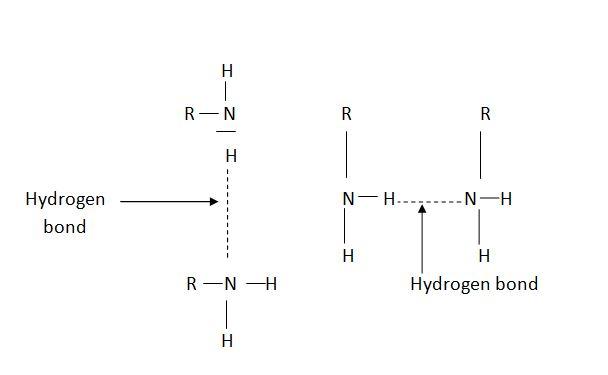 (i) Its boiling point is lower than alcohol (R – OH)
Reason: In oxygen, there are 2 lone pairs which increase its chance of hydrogen bonding.
It also has lower boiling point than carboxylic acid.
10 amines have high boiling point than 20 amines. For 30 amines, there is no possibility of H –bonding since Nitrogen is not attached to hydrogen.
(ii) Solubility:
Lower aliphatic amines are soluble in water.
Reason:- They can form hydrogen bond with water.
As the molecular mass increases, solubility decreases.
Reason: -The long chain of hydrocarbon (R) is insoluble since it is water phobic. As the alkyl group becomes bigger, solubility decreases.
Amines containing 6 or more carbon do not dissolve in water.
E.g: aniline is insoluble due to this reason.
b)CHEMICAL PROPERTIES OF AMINES
1. Basic character
Amines are the most important organic bases. Aliphatic amines are slightly stronger Lewis bases than ammonia. Lone pair an the nitrogen is readily available to accept proton in amines than it is an ammonia .

Reason:- 30 amines forms a very unstable ammonia salt. Although it can easily donate a lone pair of electrons as compared to 10 and 20 amines, it forms very unstable hydrated ion.
Note:
The inductive effect on alkyl group tends to make 30 amines more basic while hydration effect tends to make 1

amine more basic. As a result of the combined effect of these two the observed order of the base strength will be;

Methylammonium chloride
Q. Between the following amines, which is stronger base

Reason:- In Aniline there is negative mesomeric effect since lone pair is withdrawn from the amine group.
Mesomerism of aniline

For aromatic compounds, the lone pair is less readily available for protonation (addition of proton)
EFFECT OF SUBSTITUENT GROUP ON THE BASICITY OF ANILINE 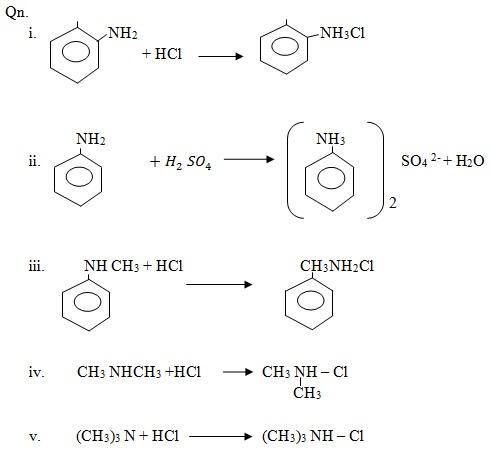 Quatenary salt
3. Reaction with ketones and aldehydes
Both aliphatic and aromatic 10 amines react with aldehydes and ketones to form a base known as Schiff’s bases.

Carbylamines (offense smell)
This reaction is a Test for 1

Note: It is used as a distinguishing test between different classes of amines.

– For aromatic amine react with HNO2 in cold (below 5ºC) to form diazonium salt.

amines react with nitrous acid to give N – nitrosoamine which separate out as a yellow oily liquid.

Amine reacts with nitrous acid to form a soluble trialkylammonium salt which is colourless.
It is not a distinguishing test since there is no observable change.

amines react with HONO to give green colour p – nitrosoamine 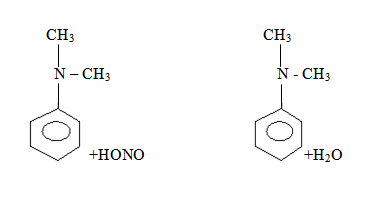 This is a distinguishing Test since there is a green colored
Reaction of amines with metal ions Ag+ & Cu2+
Reaction of aromatic amine due to benzene ring
1. reaction with bromine water
· Aniline undergoes halogenations even in the absence of catalyst. With bromine it gives
2, 4, 6 – tribromoaniline (white solid) 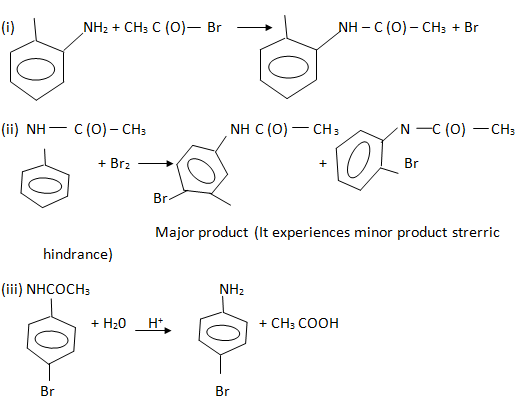 2. Nitration
Direct Nitration is not possible because aniline gets oxidized. Amine group should be protected by acylation, then nitration and finally hydrolysis. 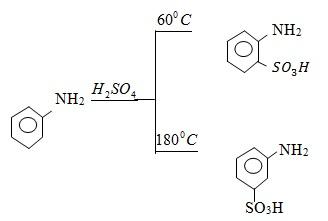 We have different products due to H – bonding. At 1800C, H – bonding will not be effective hence SO3H will be at para position.
4. Diazonium salt
· It is used to form many other products.
· Reaction is nucleophilic substitution 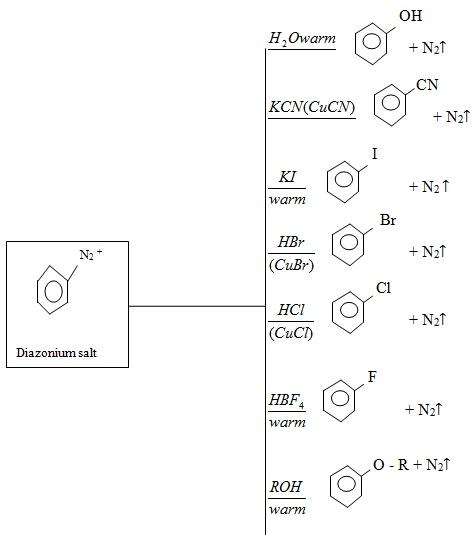 3. Why is phenylamine more soluble in

than in H2O?
4. Define the term “base.” Write down structural formula of the following compounds and arrange them in order of increasing basic strength;
Methylamine, ammonia, ethylamine, ethanamide, phenylamine. Give reasons.
5. Give structural formula of the organic products that are obtained when;
(a)Ethylamine
(b)Phenylamine
(c)Phenylmethylamin
(d)N – methylphenylamine are treated with;
(i) Chloromethane
(ii) A mixture of NaNO2 and HCl
(iii) Benzoylchloride
ANSWERS 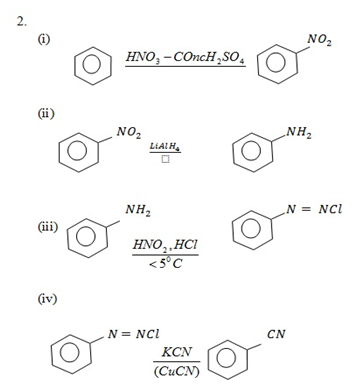 Phenylamine is more soluble in HCl since they will form a stable hydrated ion but it is less soluble in water due to the large hydrophobic part i.e. the benzene ring.
4. A base is a substance which releases OH– as the only negative ion.

QUESTIONS
1.An aromatic compound contains 80% carbon, 9.6% hydrogen and nitrogen. Its relative molecular mass is 135g/mol. It is slightly basic and form salts but given no other reaction nitric (III) acid. Identify the structure of this compound.
2. An organic base A contains 61% carbon, 15.3% hydrogen, 23.7% nitrogen. When treated with nitric (III) acid A yield an alcohol B and nitrogen gas is evolved. The alcohol B contains 60% carbon, 13.33% hydrogen and on careful oxidation yields compound C, which has a vapour density of 29. Compound C forms an oxime with hydroxylamine (H2 N – OH) but does not react with Fehling’s solution. Suggest structures for the compounds A, B and C and indicate the cause of the above reactions.
3. How does the introduction of nitro group – 2 – and – 4 – positions of phenylamine affect its basicity? Give reasons

(a) Give the conditions under which the following reactions proceed

(b) Write the structural formula for each of the organic compound formed when compound M reacts with each of the following; 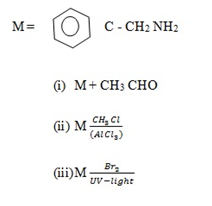 2.
Empirical formula C3 H9 N
The organic base will be 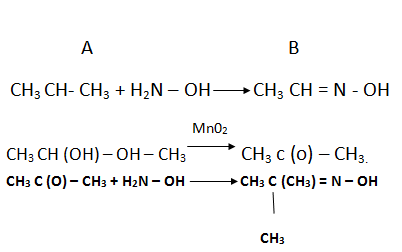 QUESTIONS
Give the equations for preparation of propanoic acid stating with;
(a) Haloalkane
(b) Ethene
Give equations (including reagents and conditions) for the following conversions;

d)Trichloromethanoic acid
e) Ethanamide
For each each conversion give a chemical equation
5. A compound A of molecular formula C4H8O2 gives propane when fused with alkali. When A reacts with Na2CO3(aq), CO2 is evolved. When A reacts with molecular formula C8H14O4 which on strong heating yield 2, 4 – dimethylpentanone. Establish the structural formula of A & B and give reason.
6. (a) An unknown compound W undergoes ozonolysis and hydrolysis. This produces an acid and a compound of formula C4H80 and Y which gives a positive Iodoform test. When X is reacted with LiAl3 the product Z, is mixed with an equal amount of ethanol, a litter conc. H2SO4 is added and the mixture is heated to 1400C major products are formula of R.M.M 74, 88 and 107 called P, Q and R.
(b) Why has an acid been produced on ozonolysis?
7. Descried, giving necessary experimental conditions, the reactions which occur between sulphuric (VI) acid and;
(a a)Ethene
(b b)Ethanol
(c c)Benzene
(d d)Methanoic acid
ANSWERS 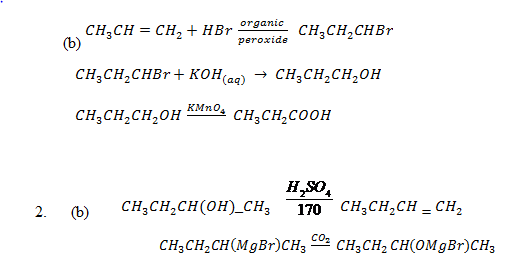 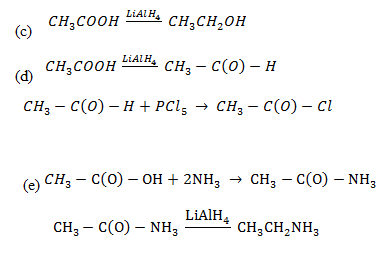 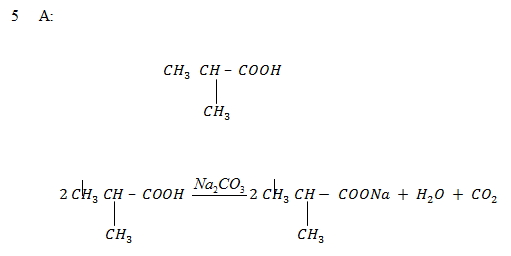 When you oxidize 2, 4 – dimethylpentanone you will get carboxylic acid A.
7.
(a)

Reason:- They are both acids.
EXERCISE
1. Suggest the reagents that bring about the following conversions;-
i. Pent – 2 – yne to pentan – 3 – one
ii. Benzoylchloride to Benzaldehyde
iii Ethanenitrile to ethanol
iv.1 – hexyne to hexan – 2 – one
v. 4 – florotoluene to 4 – florobenzaldehyde
2.How will you convert ethanal into the following compounds:-

3. How will you bring about the following in not more than 2 steps:- 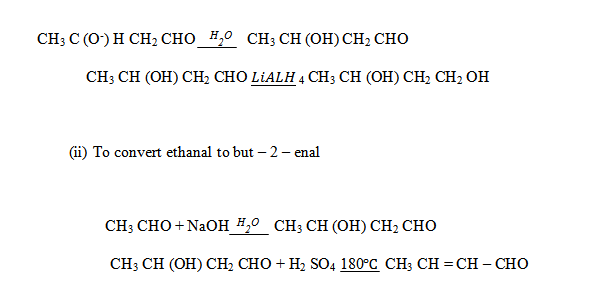