AIR
This is a homogeneous colorless mixture of different gases in the atmosphere.

Composition of gases in air
The gases include: oxygen, nitrogen, carbon dioxide, and noble gas. Air contains water vapor and dust particles. However, they are not usually considered part of air.
The table below shows the percentage composition of gases.
NB:The percentage composition of water vapor is generally caused by;
•Weather
•Geographical location
Test for gases in air.
-It is possible to test for the presence of some of the gases that are found in air.
Carbon dioxide test
-Lime water on the watch glass turns milky after a few days when left exposed. The conversion of the lime water from colourless to milky color indicates that there is carbondioxide present in the air.
Oxygen test
– It relights a glowing splint i.e when oxygen is collected in a gas jar and a piece of wood that has been lighted with fire is also placed within the jar, its going to be relighted because oxygen supports burning. Or copper turns to black on heating because it reacts with oxygen.
Water
-White anhydrous copper (ii) sulphate on watch glass turns blue when left exposed.This is due the presence of water in air.
Combustion
-This is a chemical reaction that involves the burning of a substance in the presence of oxygen then produces energy and light.
Combustible
-Is a material that catch fire and burn easily, combustion takes place in the open place such as fire or in a closed system such as a car engine.
Application of combustion in real life
Areas where combustion is applied;
FIRE FIGHTING
Fire – is the process in which ignited material combine with oxygen to give light, heat and a flame.
Fire fighting – is the extinguishing of harmful fire.
Classification of fire
Fire can be classified according to the types of materials burning hence each type of fire will need appropriate fighting technique and equipment.
The table below shows classification of fires and the appropriate extinguishers 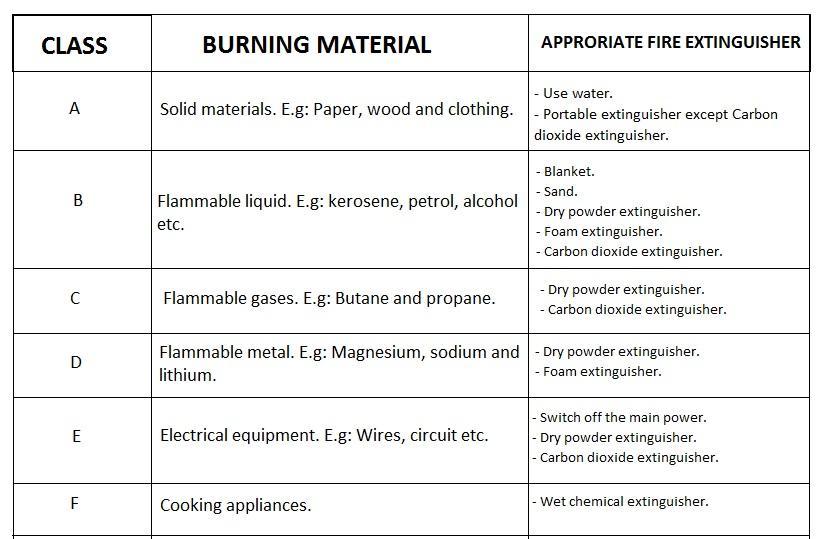 Components needed to start fire
For a fire to burn the following components are required in suitable proportions;
-The above three components are called fire triangles. If any of them is missing no fire will continue burning.
NB: during the fire fighting at least one component is eliminated to cut off the fire especially air.


FIRE EXTINGUISHERS;
Is an active fire protection device used to extinguisher control small fire often in emergency situation.
> Portable fire extinguisher is an extinguisher that can be easily moved from one place to another.

This is a chemical process that occurs in iron or steel forming a red brown coating on the metal.
Conditions for rusting
There are three conditions necessary for rusting and these are;
Methods of preventing rusting
•Painting-Is the coating of items with a special pigment point that are made of iron and usually painted to make the last long.
•Oiling-Is the coating of iron with oil .Some machine parts cannot be protected with painting so they use oil.
•Tin plating- Is the coating of iron with tin. Tin cans are actually of steel, but inside of them can be coated with a thin layer of tin to make them suitable for carrying foods.
•Galvanization- Is the coating of iron or steel with zinc.
•Use of silica gel- This is a substance in the form of grate to absorb moisture in a small bag of silica gel is put inside carrying the instrument so as to absorb at moisture that may be there.
•Use of plastics – Parts of some machines or instruments are coated with plastic to ensure that they do not rust.

b/ Mention the components of air and their percentage

2.(a) Mention classes of fire ,their burning materials and appropriate fire extinguisher.

(b) What are the components needed to start fire .

(c) What are the conditions necessary for ion to rust.

3.(a) Classify the types of extinguisher according to the chemical they contain.

(b) Explain with equation how rusting occur .